The Future of Living

In Q2 2021, we drilled down into our hopes and expectations about moving home, combining those with some of the influencing factors and of course how it relates to our ability to thrive. 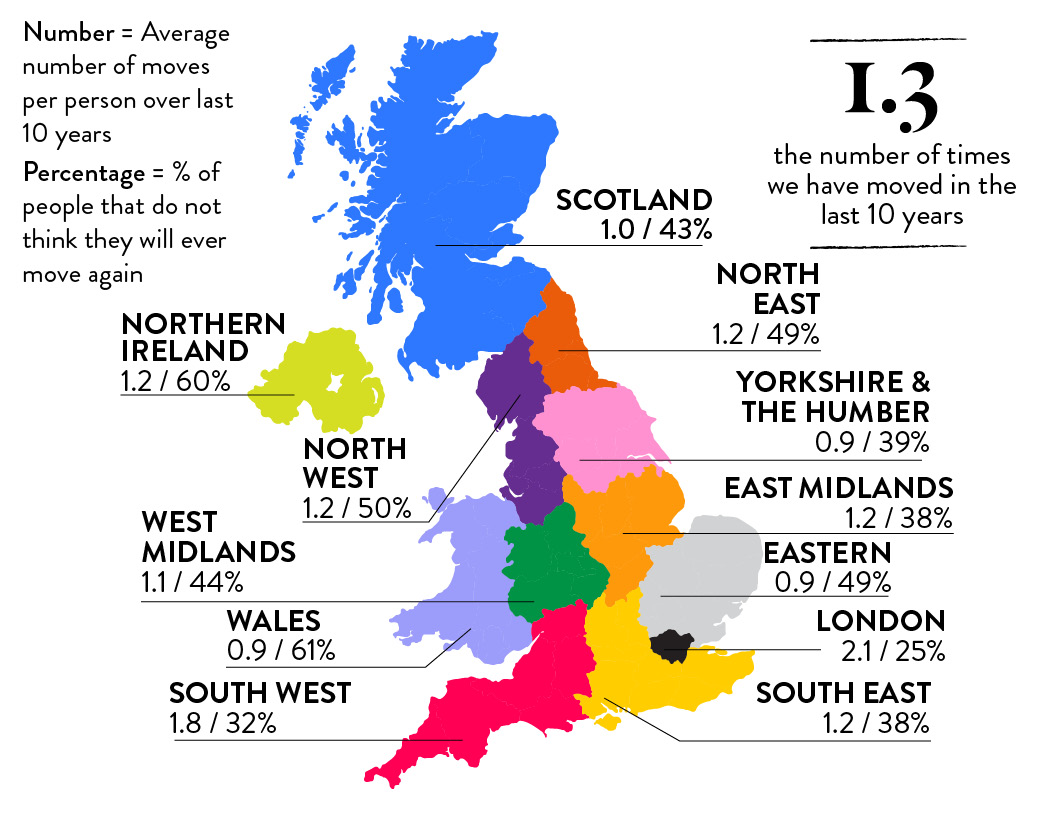 First, looking at our propensity and intention to move, it seems that we are very much still creatures of habit as a whole.

On average we’ve only moved 1.3 times in the last ten years and 63% of us have been in our current home for over five years. Furthermore, there’s a significant amount of us (41%) that don’t think we’re going anywhere ever again!

As always, the numbers get a bit more interesting as we break things down across our core demographics. Youngsters (18–34 year-olds), as we would expect are the most mobile; 50% more so than the next generation (35–54 year-olds) and four times more than those 55 years and older (on average only one in two have moved at all over this time). There is also a socio-economic element at play here as well with those in lower income brackets (<£20k pa) having moved 20% less and having 52% less intention to move than those in higher income brackets (>£40k pa).

Looking at things regionally, there’s no surprise that London leads the UK for moving around. Londoners have moved 62% more than the national average over the last ten years and only 25% expect to not be moving again. Historically, those moving least come from three geographical extremities of the mainland (Wales, East of England and Scotland) while the Welsh also top the list of those not wanting to go anywhere along with the Northern Irish.

Back to Thrive Series

Thank you for your request,
one of our team will be in contact.

Sorry, an error has occurred. Please try again or get in touch at hello@conductor.london

How the spaces and places we inhabit affect our ability to thrive, looking at how sentiment has changed since Q1 together with a deep dive into The Future of Living; where and how do we want to live?

Our Thrive Scores are a simple yet straight to the heart of the matter insight into how we feel we are faring as individuals and how we reflect on our communities as a whole.

How the spaces and places we inhabit influence our ability to thrive.